I felt like I was prepared for the worst, but I wouldn’t let myself dwell on it.  That’s kind of  the way I roll when life gets stressful- give yourself an hour or so to dwell, then move on. Unfortunately, I think I needed more than that hour this time.

We had Will’s hearing test today.  I was so nervous I thought I might throw up.  I kept yelling at the kids for no reason.  My husband was in the doghouse, and I have no idea why. One of the many things I love about Lisa (our audiologist) is that she gets right to the test, and saves the chatting for after.  I sat my baby in my lap while we did what’s called a behavioral test.  Basically, when he hears a sound he turns his head to look at the clapping (and a little bit creepy) monkey. As the lap holder, you can’t hear the sounds, so you have no idea how he’s doing.  It was pure torture.

Then we all filed back into her office, they did some other basic tests, my husband tried to reassure me that it sounded like he did well (I think he might have been even more nervous than I was), they marked stuff on their charts, and then the big moment arrived.  She showed us his chart, and I breathed my first deep breath in weeks. 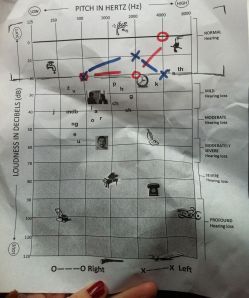 You would think that I was on cloud nine, right?  Isn’t that how you would feel?  I was deeply relieved, thankful. And yet I felt completely exhausted as soon as we left the office.  I can’t really put a finger on how I’m feeling now.  Like I hit a wall and just want to sleep for a couple of days.  Was I just a lot more worried than I thought?  Am I just recovering from the worry and anxiety of the last two weeks?  I think I’ll go sleep for a few days, and I’ll let you know.

Thank you for the prayers and support.  And thank you God for all three of my beautiful babies, each with their gifts and imperfections.  I love them just the way they are.

9 replies to The Results Are In…